Latest Posts:
A New Console To Take On The XBox One and...
Xbox One S and Xbox One X Bundles Discounted for...
Kingdom Hearts III Limited Edition PS4 Pro Bundle Available For...
PlayStation’s Black Friday “Week” Deals You Cant Miss
This is For The Ultimate PlayStation Gamer
Home ReviewGame Review Madden NFL 17 Review

Take your team all the way in Madden NFL 17 with new features in the deepest Franchise mode to-date, putting you at the center of your team’s Championship run.

Madden NFL 16 was a huge step in the right direction for the EA Sport NFL games. ’17 does a little bit to improve on that, but those changes made a great football game into an even better one. 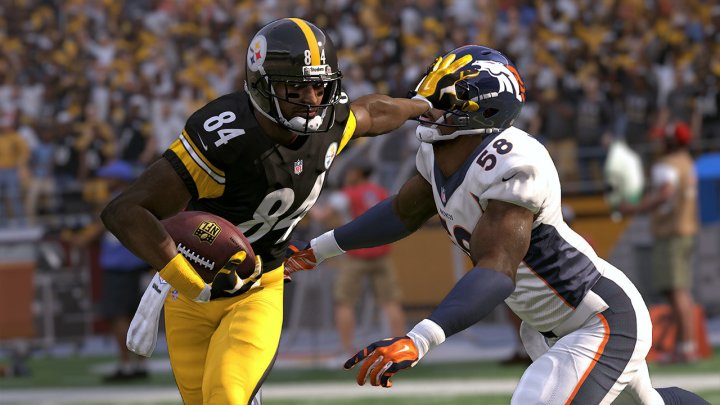 We all know the Madden games really have no story to them, so let’s jump right into the gameplay. The biggest thing EA Tiburon concentrated on this year is the all new running game. Whether you are going through a gap in the line, spinning around the outside ends, or performing a run-after-catch, the controls and movement is the best it’s ever been. Depending on difficulty level, you get a split second display of which move should be performed, whether you should juke or spin. Shedding off tackles never felt more realistic. Now more than ever, multiple opponents jumping onto your powerful half back in open space, you now have the ability and confidence of throwing those players off of you.

The animations seemed to get touched up a little bit as well. We all know Madden tries every year to make it the most realistic experience, while falling short in the sense of bugs and glitches. I wouldn’t be so honest to say this is perfectly executed this year, but it’s pretty close. Sure you’ll have the occasional players foot going through the turf here and there, or players running through a crowd of people like they’re ghosts, but on-field is as good as it’s been. Witnessing players tripping over they’re own teammates feet is something I never seen before in a Madden game and I was quite shocked! Also shedding off tackles, escaping sacks, and ball mechanics whether it be by fumbles or defected passes all seem top notch.

The kicking game has been refined, again. This time I believe it was well needed though. Now every punt and field goal is not always a sure thing. Wind is still a huge part in the kicking game, but so is the new 3-button press. Press once to start filling the meter, the second time to reach how powerful you need it to be, and lastly for the accuracy. Depending how powerful you kick the ball, the accuracy is more challenging to achieve. All of this while holding the left stick in place for where you would like the kick to land. The more important the kick is in the game, the more your controller will vibrate making it that much more of a challenge. Take more control in play calling whether or not you are kicking, punting, or blocking kicks with the newly refined Special Teams upgrade as well!

EA Tiburon has finally given us a new commentary team! As exciting as that is to say, what the commentary is this year is more safe than anything. The emotion is sometimes non existent, seems more like EA wanted to have more accurate complete commentary instead of something exciting. While I do welcome the much needed change, it’s nothing great.

There is new authentic cameras and replays. Now before snaps you might get a look at your players walking to the line of scrimmage from the coaches point of view. Scoring that very close to the sidelines Touchdown might take you to a replay of the all new pylon camera. It’s something many Madden players care little about, but for the people like myself that wants a more authentic experience, it’s amazing.

As for the graphics and performance, it’s a very smooth experience. The graphics have been touched up with giving some player faces a more detailed look, equipment looks great with the added lighting features, and the crowd looks so-so. I still feel the coaches look laughable, the crowd can look and sound a little better, and more things should be done with the sidelines. Majority of the time you’re never looking at the sidelines, but when you do see it from camera angles or replays, it still breaks immersion in the sense that your still just playing a video game. We are still not even close to the way EA explained how it would be at the start of this new generation of consoles, but they still do a fantastic job of making the game look “good enough”. The music soundtrack can use a complete overhaul next year, one of the worst of recent memory.

This is by far the most complete Madden experience. No matter what game modes you enjoy, EA gives the player many different features to mess around with. The all-new Franchise modes gives you choices of what type of practice drills you want to complete before each game. Depending on the practice you pick, you will get a boost in Experience earned within that certain game. For example, if you are facing a team that plays a run-heavy scheme, practice on your run-stop defense so you can gain more experience for your offensive line when you play those types of plays in game. Each individual player has their own set of milestones and season challenges to complete, making you concentrate on more than just winning games.

No more will each game take an hour for you to complete! If you like that way, it’s still there, but EA added in “Play The Moments”. Knocking games down to being able to complete within 20 minutes, you simulate games until something major is happening. Sometimes you have to control the offense in a very important late game drive, controlling the defense in red-zone play, or there is a huge 3rd down play that might just decide your fate in winning or losing. Play The Moments is my favorite feature in the game, and it brings out only the very intense moments in the games that we love to go through, it’s non-stop action in a very short period of time.

If you enjoy the other modes as well such as Ultimate Team, there are new changes there as well. Now especially if your a single player type of gamer, Ultimate Team gives you various challenges and situations to run through. Instead of just “Play this team and win”, some games might make you just stop a late game Touchdown drive you complete. I feel the nature of the new game mode changes makes it easier for certain players to get in with having only an hour to play, and allow them to feel they accomplished a lot within that time period. For those that have much more time to play, there is still all of the older, more time consuming ways for you to play as well.

Madden NFL 17 is the most complete Madden game ever. Last years game brought many new things to the table and changed many key aspects in overall gameplay, but this year adds to that and also changes the way we play. No matter if you have a lot of time to game, or just very little, you can accomplish many things in your time playing your favorite game modes. The redefined run game and special teams play were both well needed changes. New commentary team after how many years is well accepted. Most importantly new things for you to concentrate on and complete within certain game modes just makes this game’s longevity that much longer. Madden 17 is a very well crafted game and I recommend this to anyone that enjoys the game of Football. With how much they upgraded the ball mechanics, no game will ever play out the same as the last one, making some very incredible moments to witness.

Let us know in the comments if you will be picking up Madden NFL 17. Follow us @HardKnockGamers and join in the discussion in our Hard Knock Gamers Facebook Group – “The Best Place to be for ALL Gamers on ALL Platforms”

EA Sports- It's In The Game

I congratulate EA Sports on this years Madden. They added an extreme amount of content to the many game modes it already offered, giving players just that much more to do. New gameplay features, sound, and presentation make this yet again, the most authentic experience. With Madden being an annual release of a sports title it’s hard to add more things to an already stacked video game, but Madden once again surprises me in providing another well recommended NFL game.

Watch The First 15 Minutes of Attack On Titan

Ubisoft Decide To Shut Down Two Of Their Games!